Behind the scenes of a cutting-edge conservation project to protect jaguars and pumas within the shared landscapes of the two nations.

The print was easy to miss—a pad with four pistachio-shaped toes blotted into the soft brown earth, but there was no doubt: jaguar. We’d been riding all morning through the tall grass of San Alonzo Island on horses saddled with fat blankets, following two young researchers holding a telemeter—like an old TV antenna—searching for the ping of a GPS collar. The yaguareté, South America’s largest cat, used to roam the Iberá wetlands here in Argentina’s Corrientes province, a blanket of marsh and lagoon over 3 million acres large. But the last one had been shot out more than 70 years ago by locals to spare their livestock and supply the fur trade. Without the country’s apex predator, not to mention the impact of nearby cattle ranches and climate change—only days before, a wildfire had ripped through more than half of the park during a two-year drought—the ecosystem was suffering.

But we were here to witness a turnaround—the hopeful green shoots, which were literally pushing up through the singed grasslands—on an “Impact Journey” hosted by Les Carlisle, the legendary former head of conservation for andBeyond, one of several they run to bring guests to encounter the cutting edge of conservation. This particular trip will run this October and is bookable now. Thirty years ago, Les helped the South African safari company pioneer the practice of rewilding and animal translocation, moving 21 white rhinoceros from Zululand to South Africa and turning a patchwork of private ranches into Phinda Reserve, now home to the Big Five. Years later, this model would catch the attention of American conservationists Doug and Kris Tompkins—CEOs of The North Face and Patagonia respectively—who’d been buying up huge swaths of land in Chile and Argentina to donate to the governments to become national parks, sustained by ecotourism.

But they wanted to fully recover the ecosystems, not just save empty landscapes—which meant bringing back locally extinct species and managing the biodiversity of the rest. Eight species have been released in Iberá, including the giant anteater, pampas deer, red-and-green macaw, tapir, and, most controversially, the jaguar. Five years ago, Les helped the foundation present their plan to reintroduce the cat to wary Argentine officials, and in January 2021, a female donated by a zoo and her two cubs stepped into the wild. Now the region has become ground zero for an experiment that could recalibrate ecosystems across the continent, with more than 14 million acres protected with the help of Rewilding Argentina and Rewilding Chile, the NGOs that spun off in 2019 from Tompkins Conservation after Doug’s death. “They are writing the textbook on rewilding in South America. It’s exciting,” says Les—who, though retired, will continue to host the journeys he designed.

All listings featured in this story are independently selected by our editors. However, when you book something through our retail links, we may earn an affiliate commission. 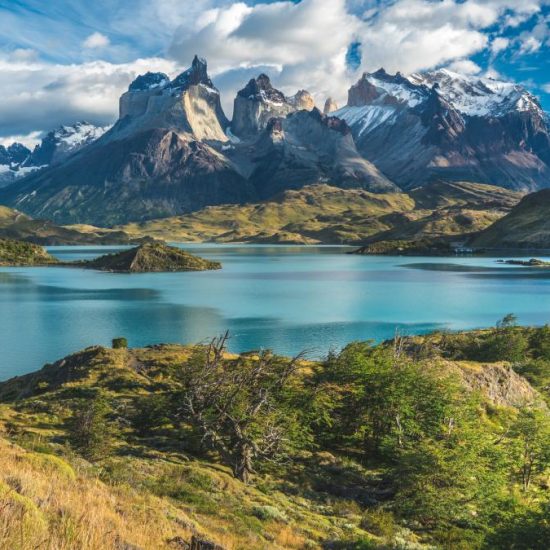