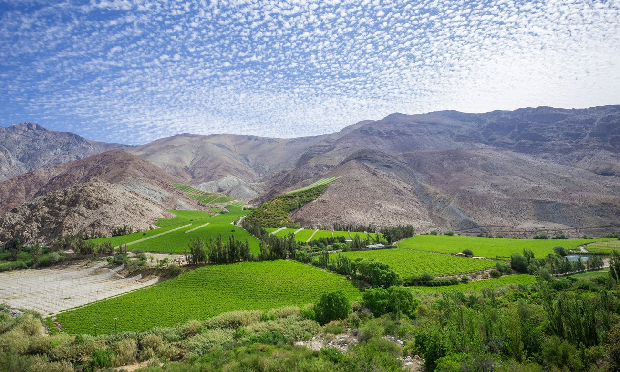 Chile has a wealth of beautiful landscapes beyond the iconic regions of Patagonia and Atacama. As the first direct flights from the UK launch, our local writer picks 10 wilderness areas featuring peaks, beaches, hot springs and indigenous villages.

Elqui valley
Inland from Chile’s second oldest city of La Serena stark mountains enclose the Elqui valley, unfolding into the Andes. The slopes are barren and bone dry but the valley floor is carpeted in the emerald green vines of pisco grapes (to make Chile’s classic brandy). This fertile oasis just south of the Atacama desert is not only the place for pisco tasting – major brands such as Mistral offer distillery tours here – but also a hub for stargazing with a half-dozen observatories and an increasing number of hotels. Most facilities are in and around the adobe village of Pisco Elqui where inky skies abound.
Getting there Pisco Elqui is 100km east of La Serena. Buses leave every half hour during the day from the Terminal De Buses in La Serena (£3.50) and pass by the airport en route to Elqui Valley.

Cajón del Maipo, the Andes
The mountains that tower above Santiago are among the highest of the Andes (Tupungato, 50 miles east of the city, rises to 6,500 metres) and you can travel into them by driving up the Camino al Volcán, alongside the Maipo river up to Cajón del Maipo. Santiaguinos flock to this Andean playground each weekend seeking high adventure, yet most foreigners simply zip in and out on half-day rafting tours from the capital. Stick around for a while and you can camp by the river, hike to San Francisco glacier, cycle to the geothermal baths of Baños Morales, or even ski down the side of a mountain (June-August) at the affordable resort: Lagunillas (lift tickets from £18).
Getting there Metrobus 72 runs from the Bellavista la Florida metro station in Santiago up to San José de Maipo (year-round) or Baños Morales (Jan-March) for £9.50. Private buses depart from Baquedano metro station on weekends.

Central valley’s parks, waterfalls and pools
Radal Siete Tazas national park – an easy addition to any Central valley wine-tasting trip – is an oasis of greenery in an otherwise barren corner of the Andes. The park is named after the Siete Tazas (seven cups), a series of pools in a narrow gorge that were carved out of black basalt rock by the Claro river. But there are other sights: the high waterfall El Velo de la Novia and the emerald green lagoon below La Leona waterfall, where many tourists dip their toes in the glacier-fed water. There are two additional swimming holes upriver near Valle de las Catas.
Getting there Siete Tazas is 160 miles south of Santiago by car, mostly along the paved Pan-American Highway (until the final 45km). It’s also possible to take the bus from Santiago’s Terminal Sur bus station to Molina (three hours, £3) and from there a bus to Radal Siete Tazas. It’s £5 to enter the park, but an overnight stay at Valle de las Catas in a tent (£8) or cabin (£53) means the entrance fee is included.

Cobquecura and Buchupureo coastline
The wild and windswept coastline between Cobquecura and Buchupureo is oddly reminiscent of the west coast of New Zealand’s South Island with emerald green hills and long, lonely stretches of sand. Step a few feet from the beach, however, and the small towns are 100% Chilean with colourful adobe homes and farmers who still use oxen-pulled carts. The epicentre of the 8.8-magnitude earthquake in 2010, these towns fear even more destruction may be coming in the form of large-scale salmon farming. Consequently, they’ve turned to tourism – namely surfing, bass fishing and wildlife viewing (including large colonies of sunbathing sea lions) – to provide a viable economic alternative.
Getting there Buses Nilahue runs daily trips from Santiago’s Terminal Sur to Cobquecura (£12). Departure is at 3.50pm and the journey lasts seven hours. Regular buses link Cobquecura with Buchupureo 13km away.

Lago Budi, La Araucanía
In a forgotten corner of Chile’s La Araucanía region lies Lago Budi, a saltwater lagoon formed after the devastating Valdivia earthquake and tsunami of 1960 (the most powerful tremor ever recorded). Its shores are populated by Chile’s largest surviving indigenous group, the Mapuche, and several families have recently transformed this serene spot into a unique “ethno-tourism” destination where visitors can sleep in traditional ruka homes, work hand-in-hand with local craftspeople and eat hearty Mapuche foods such as milcao (grated potato patties) and harina tostada (toasted wheat flour).
Getting there Two hours west of the regional capital of Temuco (by bus or car), you can either visit Lago Budi on your own or choose one of seven circuit tours offered by the community (available in English or Spanish).

Conguillío national park
With a vast forest of ancient araucaria (monkey puzzle) trees, Conguillío national park is one of the last places on earth that looks as it did when dinosaurs roamed the planet. That’s why the BBC series Walking with Dinosaurs put many of its computer-generated creations against the backdrop of Conguillío’s “living fossils”, which date to the mesozoic age. These umbrella-like evergreens jut out from the Andean foothills in all directions, creating a surreal terrain befitting of a long-lost era. The park’s true showstopper, however, is the 3,000-metre Llaima volcano, a conical peak whose last major eruption in 2009 left behind a stark, lava-scarred landscape.
Getting there Drive to the southern entrance of Conguillío, 110km from Temuco, to approach via the service town of Melipeuco on roads that don’t require 4WD. Alternatively, Nar Bus (£2.50) leaves Temuco daily at 6.45am for Melipeuco, where the tourism office can arrange a taxi onward into the park.

Pucón
The forested hills that surround the lakeside resort of Pucón are home to more than a dozen geothermal baths where you can rest weary bones in 40°C waters, often within sight of the smoking Villarrica volcano. The best of the bunch is the stylish Termas Geométricas, where wooden boardwalks lead through a fern-covered canyon to 17 slate-bottomed pools, each with its own toilet, lockers and decking. This sprawling complex boasts cascading waterfalls, fire-heated rest areas and a rushing cool-water river at its core.
Getting there Pucón is 100km away from the regional capital of Temuco by car or bus (£2; departures at 8am). Termas Geométricas (entry £16) is two hours further by car or tour (arranged in Pucón) to the southern entrance of Villarrica national park.

Caleta Cóndor beach
Chile boasts a staggering 4,270km of coastline, yet has precious few beaches worthy of a transatlantic journey. Caleta Cóndor is an exception. This bone-white beach is hidden in an indigenous reserve of the Huilliche community who, with the help of the World Wildlife Fund, have been developing tourism infrastructure along a spectacular stretch of Pacific coastline. Tourism is still nascent here and homestays are the only real alternative to camping. Each February the area plays host to one of the world’s most remote arts festivals, Festival Nomade, which draws free-thinkers from near and far.
Getting there Regular minibuses connect the regional city of Osorno with Bahía Mansa (£2), where you can book an early morning boat to Caleta Condor (£215 a boat, split among the passengers). If that’s too dear, swap the two-hour boat ride for a two-day hike.

Chilean Lake District
Chile Turismo Rural is a government-sponsored initiative that helps rural communities in the Chilean Lake District (a region stretching 250 miles from Temuco to Puerto Montt) promote authentic tourism opportunities where visitors can get off the beaten path and interact with locals (basic Spanish helps). On the turquoise Todos Los Santos Lake (in Vicente Pérez Rosales national park), that means hopping aboard a small boat and riding past active volcanoes to the small cabins and lodges along its road-less edge. Some visitors will journey onward by boat to the tiny picturesque village of Peulla, at the far end of the lake and follow the Motorcycle Diaries’ Che Guevara route through stunning Andean scenery over to the Argentinean resort of Bariloche.
Getting there Book a cabin or lodge with Chile Turismo Rural and hosts will pick you up from the pier at Petrohue, two hours away from the tourist town of Puerto Varas by public bus (£3).

Chiloé Island
You could easily mistake the gently rolling hills of Chiloé Island for rural Ireland, but travel to its southern tip and you’ll find a 1,180 sq km patch of temperate rainforest that’s pure Chilean wilderness (and one of the world’s 36 biodiversity hotspots). Tantauco Park opened here in 2005 to protect not only the virgin forests, but also a rare mouse-sized marsupial (monito del monte) and the smallest deer in the world (the southern pudú). This private reserve is a project of former Chilean president Sebastián Piñera and boasts 93 miles of well-signposted trails, as well as a mix of fully equipped campsites and unmanned refugios (huts), making it ideal for multi-day excursions.
Getting there Park headquarters are in Quellón, which receives regular buses from Chiloé’s main city of Castro (£2.50). Transport into and out of Tantauco can prove tricky on your own (and may involve a ferry, depending on your destination). Chiloe Natural runs a number of multi-day backpacking trips through the park with English-speaking guides. 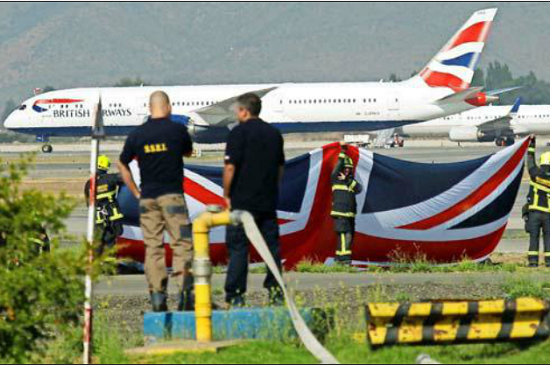